Truth to be told: I REALLY wanted to make a major update to this original "evenings with old games" post, but I ended up just making tiny changes. However, I can always make more of it on my time at Carbon-izer, so enjoy this 2012 review. Thank you!

SimCity 2000. That's been running in my family's computers for over 15 years, ever since my brother got it in August 1995 (and we had a new *color* computer to run it on). That tradition continues to including it on two forms, with the DOS form on Boxer, and the original and best on SheepShaver, a very good PowerPC emulator for my Mac. I've sung my praises for it on Two Way Roads and even for its excellent strategy guide.

And recently, I've been obsessively playing it again. Well, one city, anyway, and for purposes of this blog, it was named "Pseudo3Dopolis" (not really, but it was named after me, so if my name was really Jason, it would be Jasonopolis, but my name isn't Jason).

Splitting off from Tales of a City on Carbonizer, here are a few time progress shots of Pseudo3Dopolis. You'll notice I backfilled much of the water (which was a leftover from when I started it on Micropolis) and converted some parts into lakes. 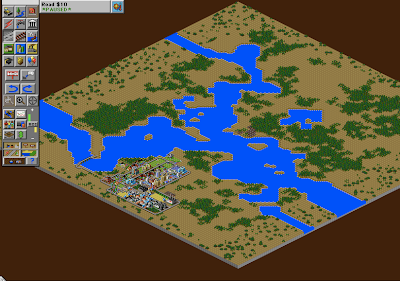 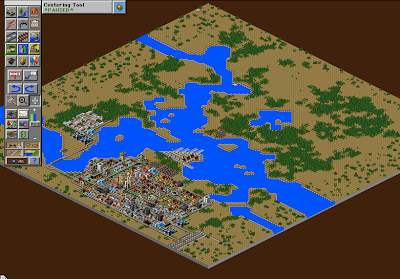 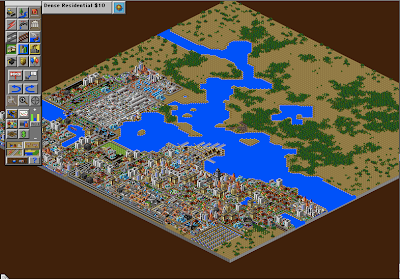 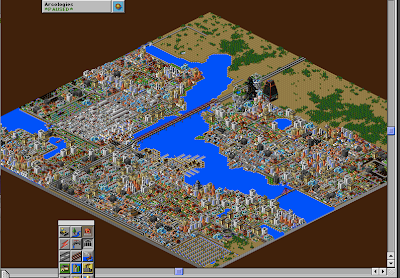 This was all done on the SheepShaver emulator. The DOS version, which I tried, is, well, crap. Despite many having fond memories of the DOS version, it has a number of shortcomings. Although initially it was faster than the Mac version, it didn't have the features that the Mac and Windows features later did. The 1.1 and 1.2 updates brought numerous features (launching Launch Arcos, the African Swallow speed, etc.) but even comparing it without the 1.2 update or the extras of the CD version (more on that later), it's garbage. For one, the resolution is much lower. The Mac version is 800 x 600 (by default, can go higher) while the DOS version puffs along at a fixed 640 x 480. The music is terrible with the wheezy SoundBlaster and only with an expensive Roland MT-32 system can you get something that sounds anything close to the Mac version. The DOS version at least has a few extra features the Mac doesn't (bull moose roar) but that's about it. And if you have a really old version of SC2K, you can type "porn" in to hear a programmer sing/say "I can't get enough", but it's not in the version I have, as it was removed fairly on. The DOS version also won't let you create your own scenarios from scratch, just editing the variables from the original scenarios, although you could get around it if you had a buddy with a Mac that could convert them into scenario files for you.

The CD version, which is the definitive version, has versions for Mac, Windows, and DOS, and includes SimCity 2000 (the latest version), the SimCity 2000 Scenarios 1: Great Disasters (which was a disk release initially and the only scenario pack ever released), SimCity Urban Renewal Kit (commonly known as SCURK, which let you edit tile sets and included a sandbox mode to add buildings where you liked), a bunch of new cities from fans, and about three new scenarios seen no where else.

All in all, it was a fantastic game and even when it gets a bit boring, there's something strangely addictive about it. It's colorful, it's well-built, and in many ways the pinnacle of the SimCity series, and it sold very well.

Over time, though, it was ported several times, ranging from decent to atrocious. The Windows version was made in 1995 and is by far the most successful/best port, but it was also made for PlayStation (which Maxis did in-house), SNES (licensed to a Japanese company called Imagineer, this version was slow and had very low resolution, much worse than the DOS version, everything very blocky), Saturn (similar to the PlayStation version, but featuring changing graphics past certain in-game years), N64 (with the interface redesigned for the controller, it featured the normal graphics, but added a lot of strange Japanese bonuses, including a dating game, horse racing, and monster breeding), GBA (developed by Zoo Digital and published by DSI, this version is one of the worse: the graphics are the same as the computer versions, but a very tiny screen, slow, no music at all, features taken out, etc etc). Of these, I played the SNES and GBA versions.

Seriously, though: SimCity 2000 was one of the greatest games of all time, and both "WillTV" on the CD-ROM and the later Maxis games was the start of something great: the ability of Maxis products to create an entire "world" by having products that focus on a single component to build something larger, something greater. Regrettably, while SimCity 2000 could import cities to SimCopter or Streets of SimCity, both of those turned out to be both terrible games limited by time and budget. SimCity 3000 could also import them, but it does a terrible job of it, and essentially anything created with SC2K ends there.