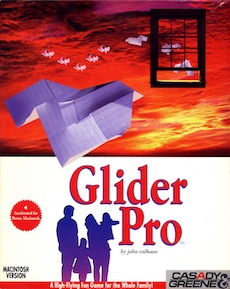 I originally wrote this for HardcoreGaming101.net, back before I had a falling out with the site for reasons I won't explain here. I had it all on the template and everything, so my work is largely done, and I've re-edited it some to better fit on my own page, where I can call the shots. I started writing it in December 2012 and continued through Spring 2013. It was a lot of hard work that I should've spent studying, and all for naught, though I think it was good practice writing. The "original" may probably never see the light of day, but here's my masterpiece, available to the public for the first time.

Games native to the Macintosh were not a rare breed--there were scads of 'em released over the years, many distributed through user groups and early online endeavors. Unfortunately, that didn't mean they were all good games. Yes, Mac games pre-OS X have gotten a bad rap (especially in regards to DOS reports, though in many cases, the Mac version was superior), but there were a few that while not completely fantastic or just memorable because there wasn't much else on the system (Dark Castle, specifically, though it was far better than its ports), were fun in their own right.

Glider was one of those games. Created by john calhoun (not anyone from American history, nor the guy who works at EA, and yes, the lower case spelling is intentional--he used that up until the release of the new Glider game for iOS), Glider went through three separate versions before being published commercially. The games (all of them) revolve around a paper airplane being navigated through a household. There are clocks to grab for points, candles to avoid, and the omnipresent (mostly) air vent, which gives your piece of folded notebook paper lift. Like why collecting clocks for points makes no sense (at least candles set your paper on fire, so that makes sense). Later games had a curious obsession with the Wizard of Oz series, which is never fully explained in the games themselves, but in the end, it sort of works.

The original games aren't especially well known, with Glider 1.0 having yet to be found as of this writing, Glider 2.0 a rather simplistic affair, and Glider 3.0 the most polished of the original black and white shareware games and the only game to feature the "bad cat", who will bat at your Glider as it approaches the window. A shot of the instructions of Glider 3.0 can be seen here. The next version was Glider 4.0, published by Casady & Greene, which carried over the numbering system but changed the format, rewrote the code entirely, added color, and generally made it a polished commercial title. It was released for Mac and Windows, with a homebrew NES port (simply "Glider") many years down the line.

In this iteration of the Glider series, released in 1991, the goal is simply to get to the open window (the "bad cat" was gone) to see your Glider go through the great unknown stormy sky. It's a definite improvement: while the music is obnoxious (a small intro to each room but just a strumming bass the rest of the way), it controls far better (your Glider is no longer constantly moving, and can rest on an air vent). It was also the only game in the series where you have an option to clearly see the air coming out of the vents. With Casady & Greene, the Glider series finally became noticed by the mainstream. A Windows version was even published.

Introducing a few new "enemies" like the basketball, which bounces up and down, preparing to crush, or balloons, which rise up and will kill you, while introducing a way for your Glider to protect itself: a battery, which gives a temporary speed boost, and rubber bands. Despite the color, the environment just feels a bit depressing. This was somewhat deliberate, as the title screen has it as "a wistful flight of fancy for those rainy days" and the Glider having windows, wheels, and caulks in the title screen, as if it were a real airplane. The color version even has instructions on how to make your own Glider in real life, along the border. With the exception of Glider 1.0 and the NES version (which costs 42 bucks, and I don't think it's even that official either), these versions are relatively easy to find and try.

With the history of the Glider series now out of the way, let's move onto the star of the show: Glider PRO. Released in 1994 as a Macintosh exclusive, the game took everything about Glider 4.0 and made it better. And because the game concept was still "flying a paper airplane around a house", it wasn't increasingly complex to play and understand. The interface got an overhaul, the graphics were improved, and the whole theme of the game changed. Rather than a dark and moody house with lightning flashing outside, Glider PRO featured prominent outdoor scenes. It also had an actual goal--rather than get to the end of the house, your goal was to fly around and collect all the stars which the house designer spread around.

This difficulty greatly depends on the house you play, as Glider PRO allows for the opportunity for your Glider to get in a tricky situation (rows of jumping fish, toasters, or water drips) or traps, or things to mess with your head (flipping a switch can cause items to disappear). Although version 1.0 did not do this, the clocks now show the correct time per your computer, so if it's 4:27 in the afternoon, the digital and the analog clocks reflect this. It's also helpful to know how late you're playing ("Oh no! It's 1:14 already! I've got an eight o'clock class tomorrow!!"). The music is dynamic, even though it seems to be a loop, it actually has four tracks that change depending on how you do. 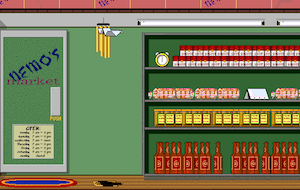 One of the included houses, "Nemo's Market", has you going through a small grocery store instead an actual house.

There's a "House Editor" to make your own houses as easy or hard as you wanted, and were greatly customizable, not just in the way you can way it was built, but with little effort, you could splice in custom sounds and images into a house's "resource fork" with ResEdit, which allowed you to pack sounds and images into your house file. The included houses on later CD releases greatly took advantage of this, which included some houses that weren't technically "houses", including Art Museum (complete with 256-color renditions of famous artwork), Castle O' The Sky (a castle), even one called Titanic (which inexplicably has your Glider traversing underwater for part of it). Designing houses were very popular in the mid-1990s though interest soon waned and dropped off.

In 2006, an unofficial (but Calhoun did give his blessing to) Flash version of Glider PRO was released, named "Glider Web". Surprisingly faithful to the original, Glider Web offered leaderboards and its own house editor (unfortunately, but obviously, houses made in the Mac version don't work). The biggest disappointment about Glider Web, besides being a largely pared-down, buggy Flash game, was the total absence of music when playing. Additionally, some sound effects are changed. At least the clocks do display the time correctly. Unfortunately, but rather expectedly, it is the worst of the three versions of Glider PRO, and you'd have a more satisfying experience if you set a PowerPC-based Mac emulator.

While Glider PRO was never ported to Windows, Casady & Greene did port it to Mac OS X. Unfortunately, as Casady & Greene went out of business before it was officially released, a Mac OS X compatible House Editor was never released (but old houses still worked). As Casady & Greene went out of business shortly after publishing, it was soon released as freeware by john calhoun. With the exception of the House Editor, the Mac OS X version is superior, and features slightly updated graphics (including a high-res title screen and some translucent effects) but otherwise identical to the original Glider PRO. Sadly, this version was never released with a Universal Binary, rendering it unplayable on Macs with Lion or Mountain Lion. There's a new game, simply titled Glider on the Mac App Store, but man, it's just not the same.

Seeing as the page where Glider PRO could be obtained is now gone (thanks to the long-defunct dumping of homepage.mac.com with the end of .mac), you can acquire a packed CD of the "Classic" Glider PRO and the sadly-not-Universal Glider PRO for Mac OS X here. In 2016, in the source was released but no projects have been done with it.