THE ROADS OF COLLEGE STATION - Harvey Road
HARVEY ROAD
Built out of the old directory page for Harvey Road, this page is "Version 5.0" of the page. In this update, Joe's Italian has been reverted back to 1704 George Bush East (it closed), Taco Bell has been updated, Johnny Carino's has closed (so it reverted to 620 Harvey Road), and a spacing error fixed near Post Oak Mall. Additionally, Post Oak Village, Plantation Oaks Center, and Shell (at Earl Rudder Freeway) have been added, the 1501 Harvey apartments have been restored as two entries, and pictures were added to Rudy's BBQ.
The buildings with even numbers are on the south side, odd numbers on north side.

1704 George Bush Drive East
This used to be a Fuddruckers for almost the last two decades (but not built as one, it was originally a J.J. Mugg's). The Fuddruckers closed in spring 2020, with Joe's Italian Restaurant operating in the spot from August 2021 to July 2022.

Wolf Creek Car Wash / 300 Harvey Road
Named after Wolf Pen Creek that runs behind the facility, this also does oil changes. It features a Chevron sign above the main road sign (changed sometime around 2019 to current colors), despite not being a gas station.

Taco Bell / 310 Harvey Road
This Taco Bell (from 1981) did a major remodel/expansion in the early 2000s. I believe it was temporarily closed during that time.

Fazoli's / 400 Harvey Road
Here since around 2001, this is one of the few remaining Fazoli's restaurants in Texas.

Connecting Point Church / 410 Harvey Road
This church (since at least 2014) was originally an OfficeMax. Around the time of OfficeMax's construction in the late 1990s, the road was extended out to Wolf Pen Creek (but dead-ended), the stoplight may have been installed around that time. Around 2003, the road was extended to Holleman.

Chain barbecue restaurant. Maybe not so much "Country Store" (see the link for more), but a few places before Rudy's (though the building was rebuilt for Rudy's).

Sonic Drive-In / 512 Harvey Road
This Sonic (built '99) has an unusual color scheme and some seating near the Wolf Pen Creek trail.

Ozona Grill and Bar / 520 Harvey Road
This has been Ozona Grill since 2003, but before that, it was Kona Ranch Steakhouse, a concept by the owners of Johnny Carino's for the first four years or so of the restaurant building's construction.

Pro-Tec Auto Repair / 601 Harvey Road
This auto repair shop has been here for years, though probably not always under that name.

This stoplight has barriers to prevent access from Dartmouth to the shopping center. The next light, Munson, has the same thing. I wish that they blasted through some property to make Dartmouth and Munson one road, but the residents of Munson fought tooth and nail for years to prevent Munson from being a useful north-south corridor.

Woodstone Center is a strip center with some "interior" stores, a bit like a small open-air mall. You can see an overview of the place here (I got it from Loopnet, which got it from an old city document).

Post Oak Village / 900 Harvey Road
This shopping center at the corner of Dartmouth and Harvey Road (a stoplight leads directly into the shopping center at Munson, though you can't go straight at the light) has several tenants and was built in 1982, probably soon after the mall opened. Until 2012, the east end of the shopping center had a larger footprint to accommodate a larger end anchor. This was later reconfigured to be the same profile as the others in the strip. Originally, the center had about 17 suites numbered 1 (on the Dartmouth side) to 17 (on the mall side) but over the years the spaces have been reconfigured, so it's difficult to gauge the timeline over the years. This is the current layout of the center, archived from this page at press time. There's unfortunately no tenants listed.

Post Oak Square / 1000-1100 Harvey Road
This large shopping center on the south section has seen a number of tenants come and go over the years including Hobby Lobby, Weingarten, and Toys R Us. It currently has a Krispy Kreme in the parking lot, its first parking-lot restaurant since Grandy's closed many years prior.

For many years, the apartments were actually two complexes, Plantation Oaks Apartments (the original at 1501 Harvey), and Briarwood Apartments (1201 Harvey), a property split off from the original. Briarwood even featured its own nightclub on the premises, Zacharias' Green House. While Zacharias' Green House closed in the early 1980s, both apartments remained stable and separate for nearly forty years. in 2018 it was folded back into Plantation Oaks and the whole thing was briefly renamed as Castlerock Apartments before its current name, The Grand 1501. A few years later, the Briarwood section split off as The Ivy again. The blog has an article on the apartments but it's somewhat out of date.

Plantation Oaks Center / 1401-1409 Harvey Road
This small strip center was built as a commercial companion to Plantation Oaks Apartments (above). Its current tenants include EZ Stop (1401 Harvey), built as a 7-Eleven, sold to E-Z Mart in the early 1990s with the other local 7-Eleven stores, and separated from the chain in the early 2000s, along with Donald's Donuts (1403 Harvey), HairCuts 4U, Pro Soccer (both sharing 1405 Harvey), and 1409 Harvey (Washateria Coin Laundry and Metro by T-Mobile). There's no 1407 Harvey for some reason. 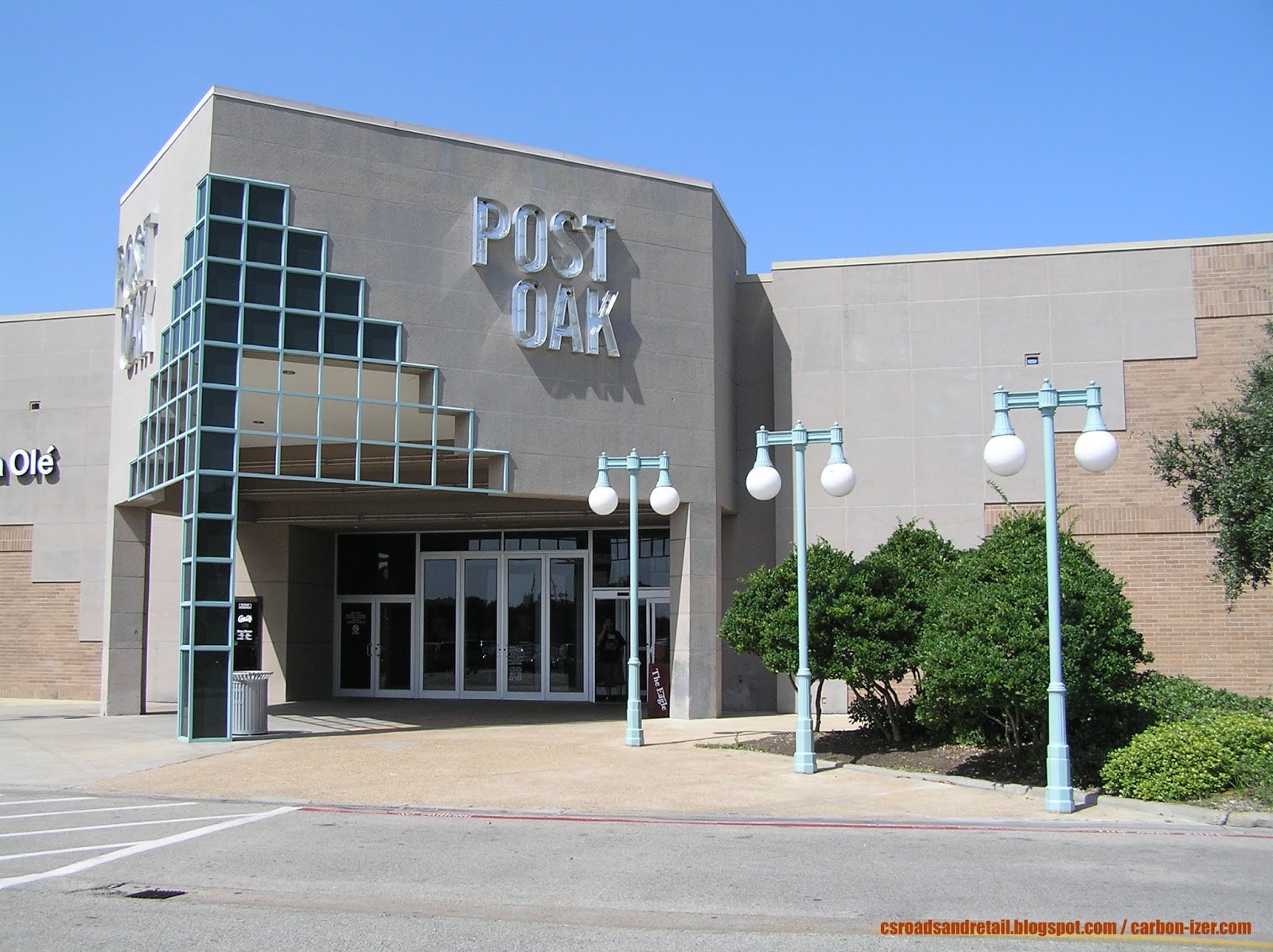 The city's only enclosed mall, built in 1982, though has largely fallen out of favor. Check out the Brazos Buildings & Businesses post, where I've been working on adding a full tenant history.

BJ's Restaurant & Brewhouse / 1520 Harvey Road
In July 2011, a second full-service restaurant opened in front of the mall, but these two were the only ones rather than the whole frontage. In retrospect, the lots were probably sold by Sears, which commanded that part of the parking lot and part of the slow dismantling of the chain.

Earl Rudder Freeway can be accessed through this page. Harvey Road goes to two lanes at this point.

Shell / 2601 Harvey Road
Built as a Chevron in 1996, this was converted to a Shell sometime around the mid-2000s. Plans are in the works to demolish and rebuild this as a larger gas station with an "Aurora" convenience store.

Carter Creek Condos / 1451 Associates Avenue
Associates Avenue has long been a truck route and back way out of the movie theater (and Sam's Club, but mostly the theater), but these condominiums were built around 2018-2019.

Koppe Bridge Bar & Grill / 3940 Harvey Road
This restaurant opened in August 2002 at the long-defunct site of Jose's (which moved to Bryan in the early 1990s after their building at 4004 Harvey burned down).

C&J Barbeque / 4304 Harvey Road
C&J Grocery opened in 1981 as a small store and gas station, but later focused on barbecue entirely. The old gas brand isn't known at this time. Just east of here Harvey Road becomes Elmo Weedon Road, which peters out in a series of roads that all turn back on themselves. State Highway 30 itself continues to the south beyond Boonville Road. Return to the Main Page | Email

Copyright 2020 Carbon-izer.com, this site is not affiliated with any businesses listed here.